We’re in for a mainly soggy and stormy week ahead, with a break for some sun mid-week, but more storms as we head into the weekend. The first nor’easter of the year will be impacting much of the state on Tuesday with rain and wind. The eastern portion of the state will see the highest impacts with heavy rainfall and high winds for much of Tuesday. Central PA and areas west will not escape the impacts, as rain and winds will be present for much of the day, however not as steady the further west you get.  We should rebound pretty nicely on Wednesday with clear skies across much of the state, and temperatures rebounding back into the 60s for most. However, another system will be moving into the state Thursday night into Friday, bringing more rain and wind for most. While there’s still some uncertainty with the track, it looks like most of the precipitation will be out by the second half of Saturday, providing the state with an overall pleasant and clear weekend.

Cloudy with a chance of showers in the afternoon, lingering into the overnight hours. 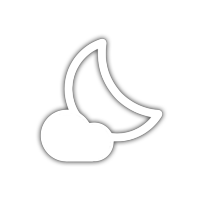 Mainly cloudy and cooler early in the day as clouds clear out.

Cloudy skies during the day lead to a chance of precipitation later on.

Full cloud cover for most of the day with constant rain being the theme.

Periods of rain throughout the day, with precipitation becoming more scattered overnight.